One of my favorite birding blogs, 10,000 Birds, is putting together a retrospective of its readers’ best birds of the year 2012. To me, “best” is a purely subjective term. I am sure that for most birders the rarest or most unlikely bird that they encountered would qualify as their best. But the single bird that I am choosing as my best is a common bird that was found in its expected range about 15 minutes away from my house. 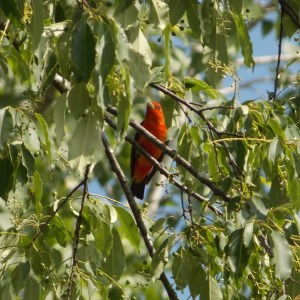 Jaime, my amazing wife, took me on a birding excursion on our day off to celebrate me finishing my master’s degree. It was May 8th, and we went to Eagle Creek Park on the west side of Indianapolis for the first time (the park has since become my primary birding home base). I had seen a Summer Tanager for the first time a few days beforehand, so I had Scarlet Tanager on my mind and hoped to see this bird in particular. After walking around for a couple of hours, Jaime and I came across another birder who asked us if we had seen anything good, to which I replied a typical summer checklist of alright birds: Indigo Bunting, Baltimore Oriole, Yellow Warbler. When we asked the same, she told us that she had spotted a Scarlet Tanager. I had already told Jaime about my hope to see this bird, so we single-mindedly followed our informant’s cue to check out some trees on the north side of the reservoir. Within minutes, we were rewarded with our goal bird.

Seeing a Scarlet Tanager for the first time was definitely my biggest birding highlight of the year. Even though I got to see exotic species in places like Europe and Florida, and even though I came across rarer birds in Indiana, this one was special. Jaime stopped and stared at it with me until it had flown out of sight. Even if you aren’t a birder, you can’t help but appreciate the awesome colors of this bird (even though this one in question was an immature male and not quite as red as others like him). The fact that I got to enjoy the experience with my wife made it that much better.

Earlier in the spring, I didn’t even have a life list put together, and when I created one I found that I only had 109 species even though I considered myself a birder. The Scarlet Tanager was one of the first new birds of the year that I encountered, and the experience made me that much more excited to pursue the rest of them. Today, just over eight months after that sighting, my life list is up to 181 species. I feel like this has been the year that I became a serious birder, and the Scarlet Tanager feels like a milestone bird in turning that corner.