That would make a great name for a British-style pub, no?

Over the last two weeks my primary birding destinations were Foster Park and Fox Island. Some of the highlights: 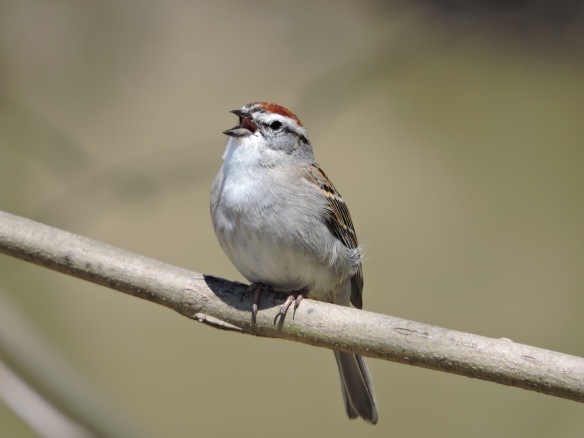 Chipping Sparrows are incredibly common early spring migrants, but I am loving my new camera. 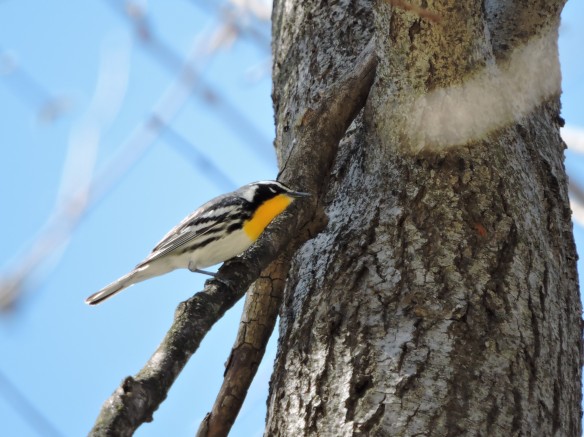 This Yellow-throated Warbler at Foster Park was foraging in the same tree as a Brown Creeper. Disorienting, to say the least. The juncos and creepers hung around into last week, but an outing today netted none of the strictly winter birds. 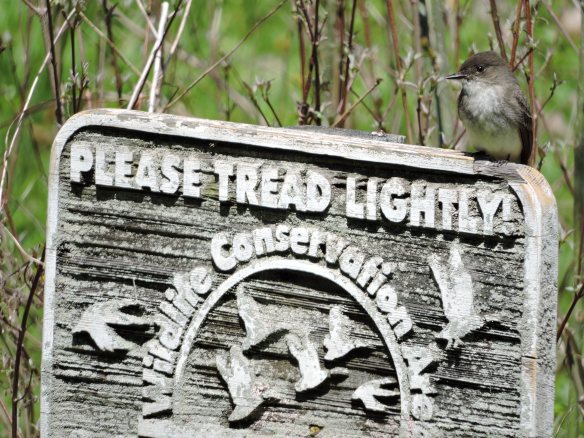 I turned my bike toward Fox Island today and came up with a pleasing three dozen species. One of them was the above Eastern Phoebe imploring you to tread lightly. Earth Day vibes all over this one. 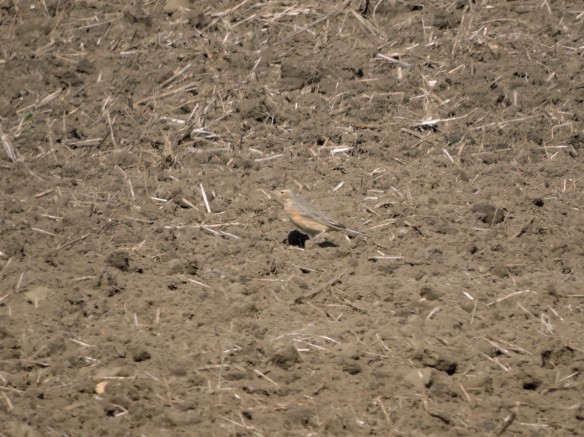 It was great to have about half a dozen warblers plus a few more new migrants, but the most surprising birds of the day came before I even got to the park. A tractor was plowing a field along the road, and some Killdeer and robins were gorging on the bugs that were getting kicked up. I somehow managed to catch sight of two smaller dirt-colored birds way out in the field with them, and they turned out to be American Pipits. This is only the second time I have seen this species, and it was not on my radar at all as a possible green bird! This one plus the others I got today bumped my list up to 80 on the year. 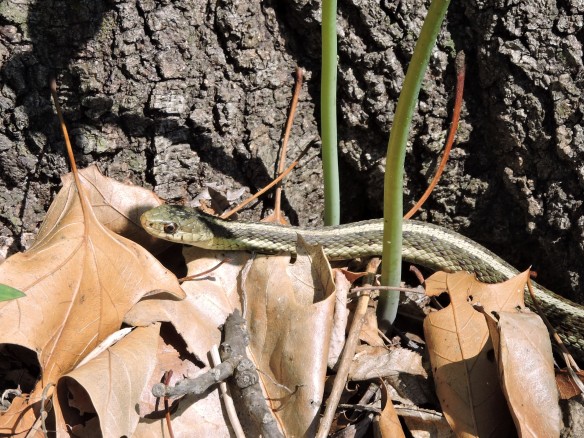 I happened across an expert local birder at Fox Island who I hiked with for about an hour. He thankfully put me on to a ton of things I would have missed otherwise (hello, Pine Warbler!) He also managed to identify this snake for me as a Garter Snake. I probably should have known that. Thanks, Rodger! 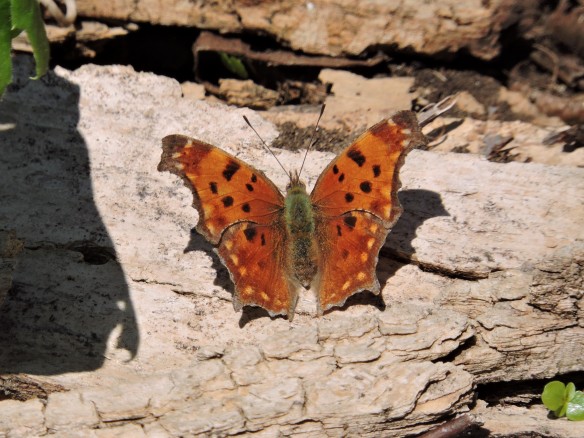 While birds were numerous, they were less than cooperative for photos. Thank goodness for butterflies. I was actually able to call this Eastern Comma in the field thanks to the reading up on them I did last summer. 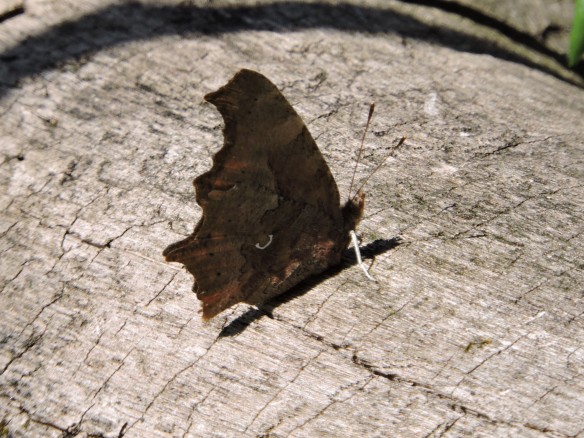 Who gives an [expletive] about an Oxford Comma?

It also helped that the namesake punctuation mark was easily visible on the underwing.

Not as easy was this supposed Spring Azure. I will take corrections on this one. Final thought: if you use birder banding code on butterflies, this one becomes SPAZ, which is very fitting.

I write this entry from a Red Roof Inn on the outskirts of Evansville, Indiana. Work has me making numerous stops all over the state over the course of three days. Today, I found myself pointed southwest, which is pretty easy to do considering Fort Wayne is about as northeast as you can go. 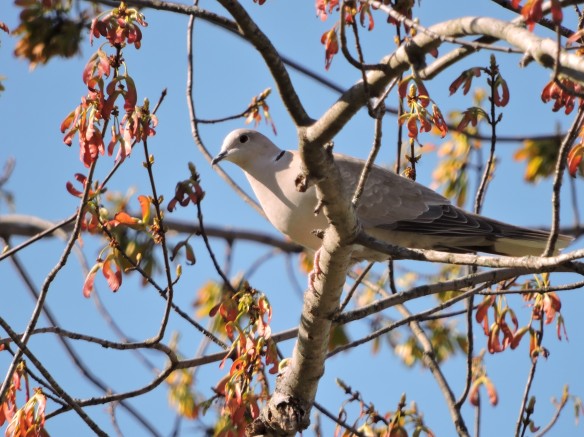 This is not a birding trip. I swear. But at one of my very first stops in the city of Delphi, I found a new state bird in Eurasian Collared Dove foraging in the maple seeds directly above my appointment destination. A good omen!

Two of my next stops were Shelburn and Winslow, small towns serendipitously placed on either end of Goose Pond Fish and Wildlife Area. Goose Pond is the real deal. I have been there once before, but that was in February a few years back. Today the sun was shining and the migrants were migrating, so I got out for about an hour to stretch my legs after driving for so long.

Goose Pond is 9,000+ acres of restored wetland habitat in western Greene County that packs such a big ecological punch that it attracts some insane rarities (Spotted Redshank, anyone?) and has actually altered the migration routes for many species that historically didn’t push very far into Indiana. 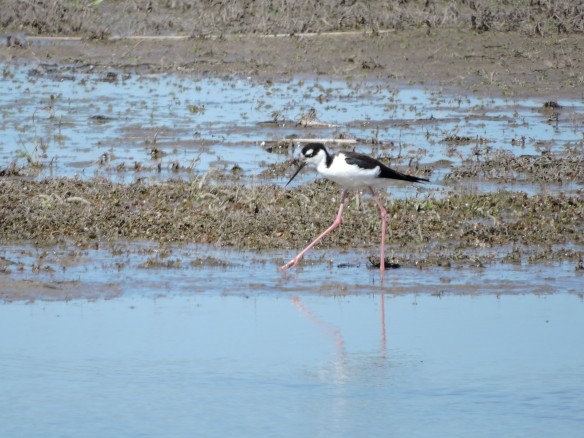 The absurdly cool, ludicrously proportioned Black-necked Stilt is one of those birds. 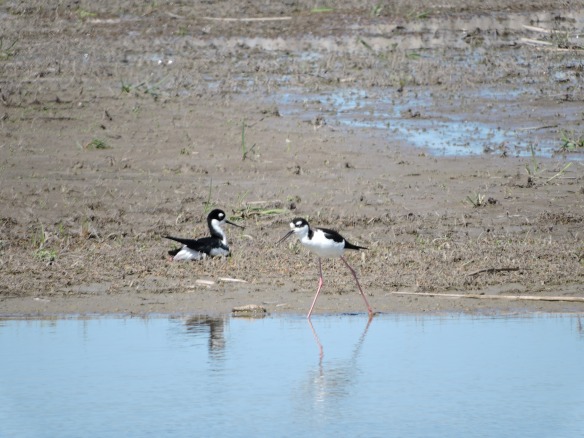 Goose Pond has made these gangly birds common in the southwest corner of the state, and they even breed here, which may be something this pair is getting ready to do. Stilts were my biggest target in visiting Goose Pond, and they did not disappoint as life birds! 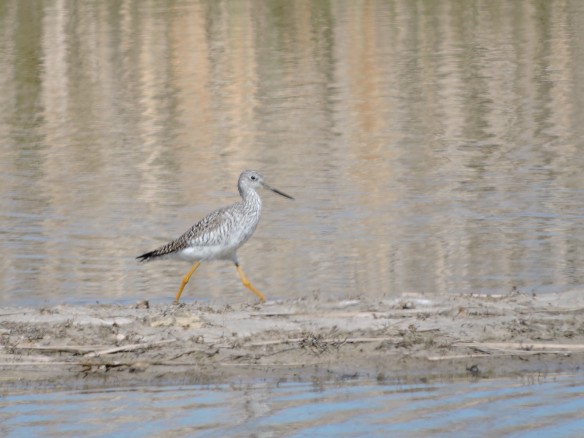 I was fortunate that this Greater Yellowlegs was around, because the stilts were much more interested in it than in me. They kept chasing it away when it foraged too close to them. They absolutely dwarfed it, too. 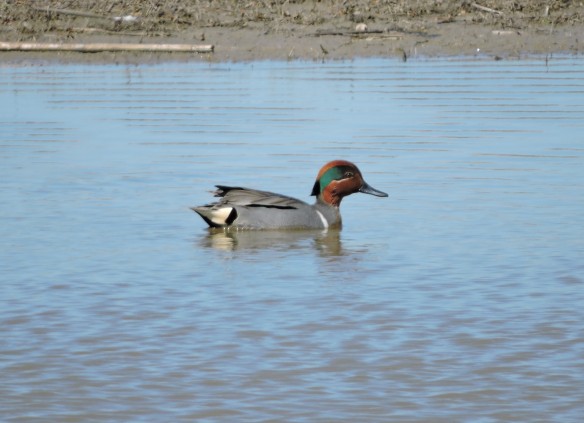 While shorebird watching, I had a close encounter of the teal kind. This handsome drake landed right in front of me and gave me the best look at the species that I have ever had. 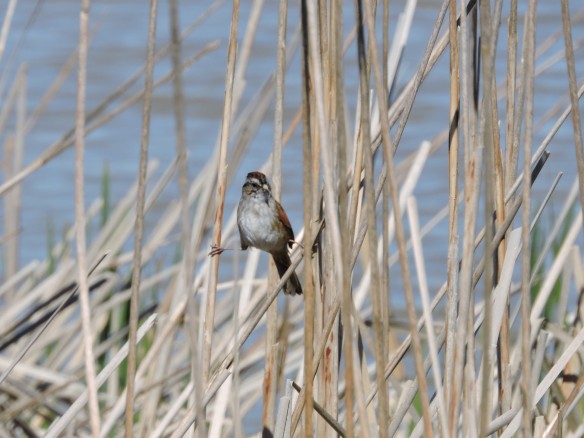 All birds at Goose Pond are beautiful, including the little brown jobs. I admit guilt in having sup-par sparrow watching skills. I usually assume every non-Zonitrichia sparrow is a Song Sparrow, but now I am wondering how many Swamp Sparrows I have missed in my life. 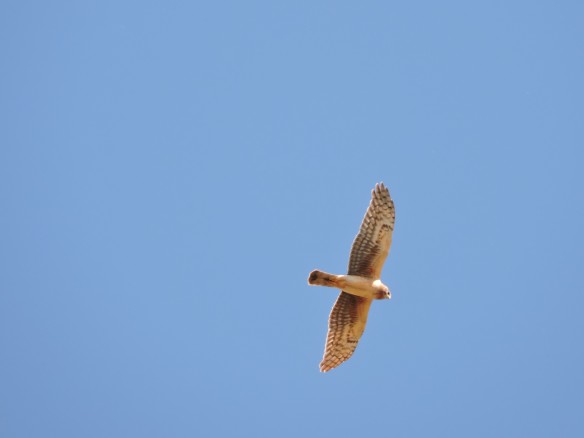 The weather was perfect for birding today, as evidenced by the blue sky behind this Northern Harrier. It flew right in front of the moon at one point, but my camera would not focus fast enough for a photo. 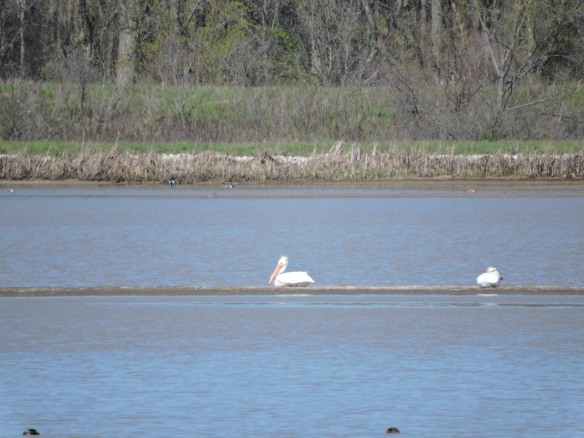 I don’t think I will ever get tired of the reaction people give me when I tell them that there are pelicans in Indiana. 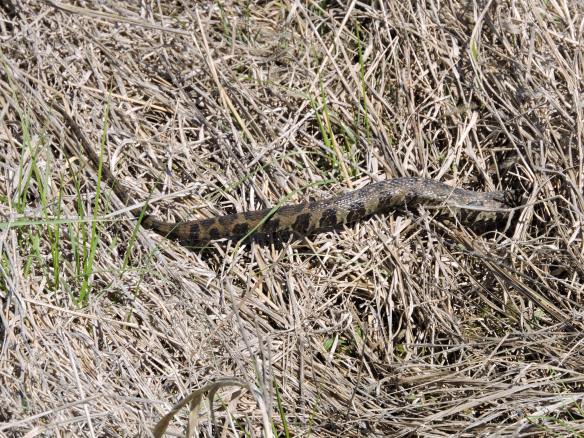 Some other animals were around, too. I don’t know anything about snakes, but Wikipedia tells me this snake butt might belong to a Northern Water Snake. Can anyone corroborate? It was big. 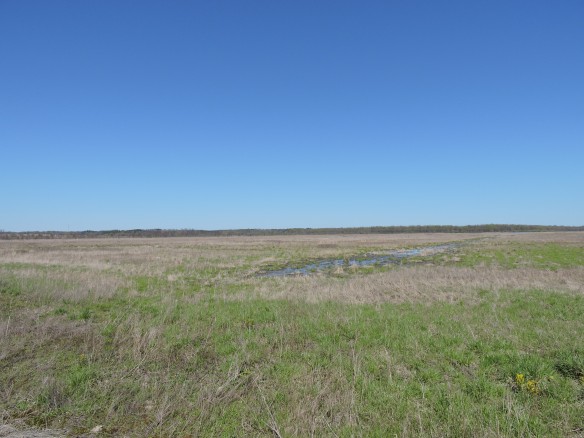 Goose Pond is broken up into segments divided by (unpaved (sometimes flooded)) county roads. The one that I tromped around in and that seems to be the place to go for the best diversity of birds is Unit 10. The place is so huge you could easily spend a weekend there and still not see it all, so I will be back again the next chance I get.

Franke Park is a great birding spot on the north side of Fort Wayne. I only went one time last year to chase Black-bellied Whistling Duck, but I rode that way on Sunday even though other hot spots are closer to me. I need to remind myself to go more often this year. 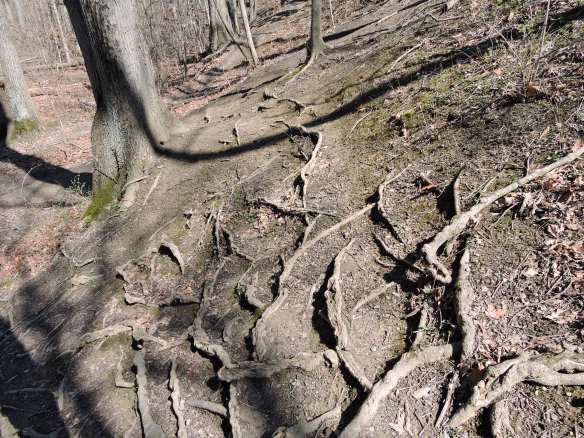 The park is crossed by numerous mountain biking trails, but it was quiet when I was there. A large creek running through the park provides some great forested stream habitat that attracts tons of migrants in the spring. The woods also open up onto more park-like lawns, creating a ton of edge habitat. 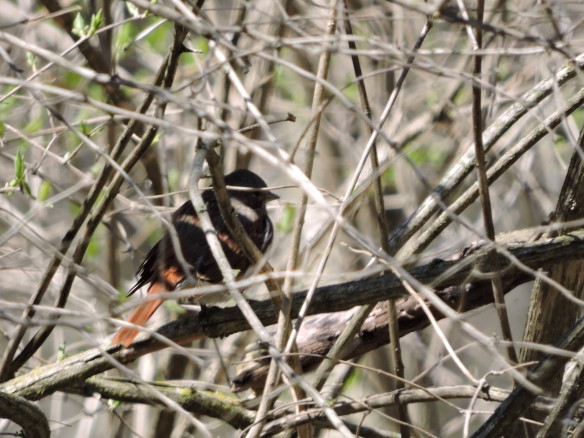 I managed two new birds for the green list, the first being a flock of Fox Sparrows being skulkariffic in the brush. I did not see this bird last year, so it was great to get. 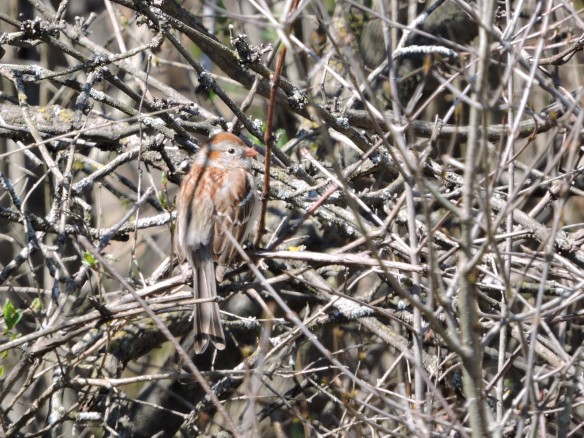 The second was a pair of Field Sparrows. I am used to seeing these birds in overgrown and weedy fields sharing space with Common Yellowthroats and Willow Flycatchers. But these two were working the edge of a brush/lawn transition that I have never seen them in before. It seemed like much more of a habitat for Chipping Sparrows, which are a bird I still haven’t seen yet in 2016. Quirk of migration? 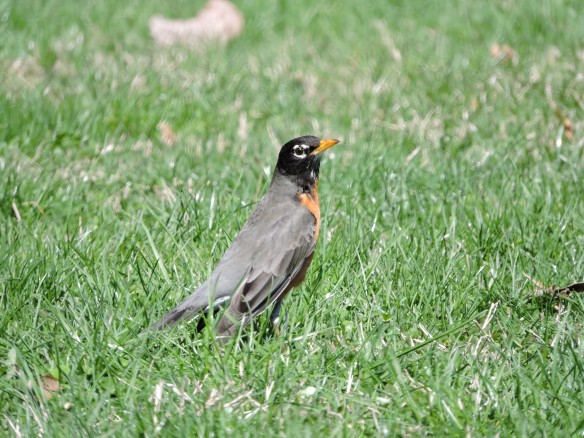 Seriously. This is who was foraging next to the Field Sparrows. On that note, American Robin is a very underappreciated bird. Even though your aunt loves to post photos with captions about how they mean spring is finally here, they are voracious predators of a singular mind. How many other birds have you seen that literally rip their prey in half during the struggle, raptors included? That’s what I thought. 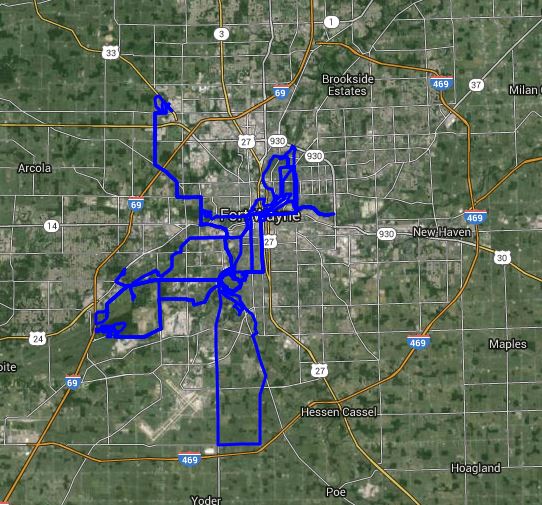 At the beginning of April, I am at 67 green species. I didn’t hit that number until early in May last year. The map above shows all the ground I have covered while birding on bike and foot, and including overlapping routes I have traveled 273 miles to date doing so.