Fall is confusing. And I don’t mean in terms of the dull, basic-plumaged birds floating around at this time of year. I went to Fox Island last week, bird mecca #1 in Fort Wayne, and found nothing but the gates to Mosquito Hell. Meanwhile yesterday I happened to glance out of the back window while watching football and gazed upon a foraging frenzy by a mixed flock of great migrants:

Stars among them were several Cape May Warblers, a species that became yard bird #47 for the year and a half we have lived at Grosbeak Gardens. 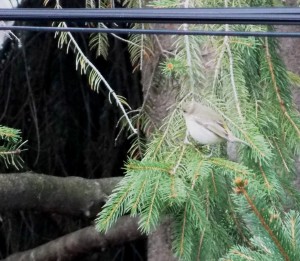 The warbler action also included a few Yellow-Rumpeds, including one that checked out our bird feeder for a second or two.

Also present were the duo of newly moved-in Black-Capped Chickadees. Chickadees have become very interesting to me since moving to Fort Wayne, since the city lies smack in the middle of the overlap zone for Carolinas and Black-Cappeds. We live south of downtown, and the only species I had seen in the area previously were Carolinas, with Black-Cappeds occurring north of town, or in very small numbers in some of the more birdy areas like Fox Island. However, since last month our Carolinas have been evicted by Black-Cappeds, and they are now the only chickadees that I see in our neighborhood. This new development is contrary to everything I have read about Carolinas pushing north and displacing Black-Cappeds in the southern part of the overlap zone.

In comparison to the Carolinas, the Black-Cappeds have more color saturation in their buff-colored sides, and their white cheek stretches further toward the back of the head, as the bird above exhibits. They also have more white edging on their wings. It’s pretty cool that we have had both species in our yard. Now I can hope for another appearance of a Fort Wayne Boreal Chickadee (it has happened before, apparently). 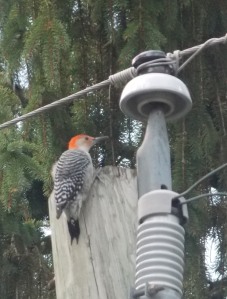 I will leave you with a photo of the always industrious Red-Bellied Woodpecker going to work on our utilities. I apologize for the sneakily-disguised “there are some birds I saw in my yard” post. But I will spare you a photo of a cardinal.