I didn’t have any intentions of updating progress on my 2013 Indiana list, but a walk around Foster Park earlier today with Jaime and Emma The Dog yielded two new year birds: #138 Yellow-Throated Warbler and #139 Philadelphia Vireo. That’s all for that.

What I was really coming here to say today was that I have some housekeeping issues to clarify on this blog. The first is that my life list was incorrectly numbered at 209 birds, when in reality there have actually been 210 on it this whole time. The second is that after consulting eBird, I am going to remove Muscovy Duck from the list (see this post), because even though the birds I saw were unrestrained and breeding, the ducks in Miami have hybridized with domestic birds, leading to an impure breed that isn’t truly wild. So we’re back to 209 species on the life list.

However, further consultation of eBird led me to discover that some other birds that I saw in Miami that I thought were the same as some that I saw in Europe (see this post) are actually different. Apparently, the Common Moorhen lives in Europe, while the Common Gallinule lives in North America. I have seen both, so I am adding Common Gallinule to my life list, bringing the total to 210 again.

Finally, after going through some old pictures from a trip to San Francisco in 2010, I realized that a bird I identified as a Herring Gull is actually a Western Gull. 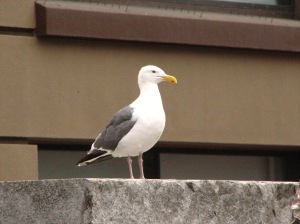 This Western Gull has a much more robust bill than his Herring cousins, so I can now up the life list to 211 species. This marks the first time that a misidentification that I have later gone on to correct has actually resulted in an increase to my list.

And speaking of lists, the final housekeeping item for this blog (blogkeeping item?) is the addition of two new list pages at the top navigation bar. The pad of paper on the kitchen counter is growing unwieldy, so I am adding our Yard List to this blog. I am also adding a County List page, because apparently that is a cool thing to do, too. There are people who track what is called the “century club,” or seeing 100 birds in every county of a state. If I am playing that game, then I have reached the century mark in 2 of Indiana’s 92 counties. I’ve got a long way to go, but this will help motivate me.