I haven’t had a lot of opportunity to go out into the field since Walter has been around, so for a birthday present Jaime watched him while I went to Eagle Marsh for a couple of hours with my binoculars and camera. Exactly one year previously, I birded Hyde Park in London, and while Fort Wayne is not as exotic of a locale it still gave me some pretty good results.

Right off the bat I saw two of the Marsh’s namesake birds wheeling around with a bunch of hawks. 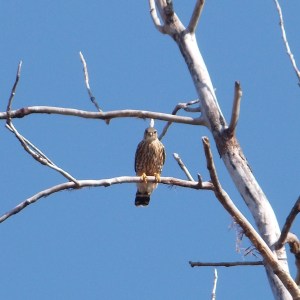 While eagles are cool, I was much more interested in this Merlin, a life bird and year bird #145 for me. These falcons made some news this past year with their first-ever documented nest in the state of Indiana not far from Fort Wayne. Because they are not resident, this one was totally unexpected and the highlight of the afternoon. 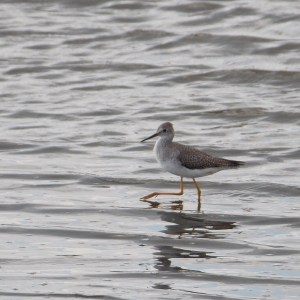 Both species of Yellowlegs were also out in force at the marsh. I got some of the best looks I have ever seen of either species, and none of the birds minded my close approach. I used to be confused by identifying these birds, but the more I have seen the easier it gets. Look at the relative length of the bill on the Greater compared to the Lesser, and identification is easy. It also helps that the Greater’s bill is slightly upturned.

And just because I haven’t posted a picture of them in a while, here are some American Coots living up to their colloquial nickname of Mud Hen. 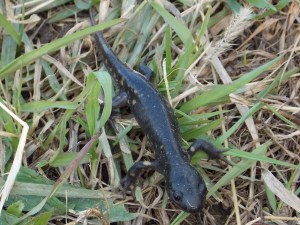 I also saw this animal, which I am pretty sure is not a bird. Any amphianologists care to tell me what this is?