Rain has been sparse over July and August, but June gave us so much that things are still pretty soggy. That means little stopover habitat for migrating shorebirds, with mudflats few and far between. There has been one narrow but reliable stretch of sediment at Eagle Marsh, however, so it has been featured prominently as of late. And here it is again.

This is the same spit of dirt that gave me a pair of American Avocets a few weeks ago (although now it is sporting some algal growth). There was little activity on the jetty last weekend, but of the small variety there, half were new for the year. Included in that number were two Caspian Terns, a county bird and motorless #118. 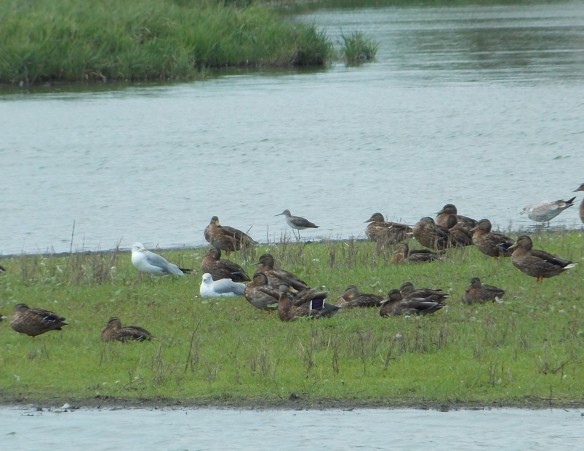 Among the Ring-Billed Gulls and Mallards was a distant shorebird. A year or two ago, I would have cursed this bird for not giving me a good enough view. But I have grown in my ability to ID shorebirds considerably, so the name Greater Yellowlegs came to me pretty easily for #119. The bill length and slight upturn is a giveaway. 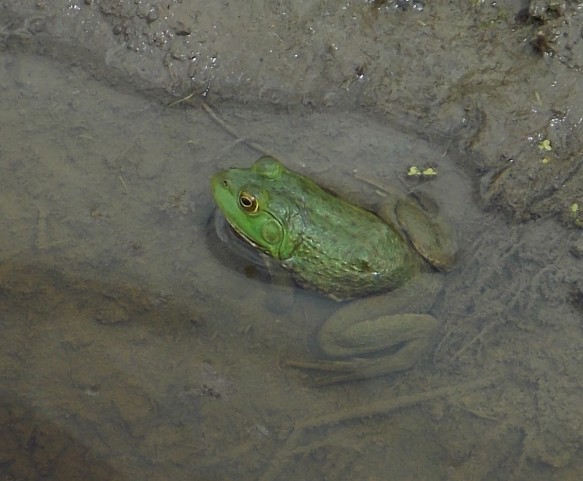 With few birds around, I turned my attention to other things, like this American Bullfrog (while daydreaming about a bittern bill spearing it from the water).

And this Common Buckeye was perched right near my bike as I left for home. It’s presence and attitude about those nettles seems like a pretty good omen for those other Buckeyes’ defense of title. (12 days away, but who’s counting?)

On Saturday I headed back to Eagle Marsh to check on the mudflats and see if anything new flew in. 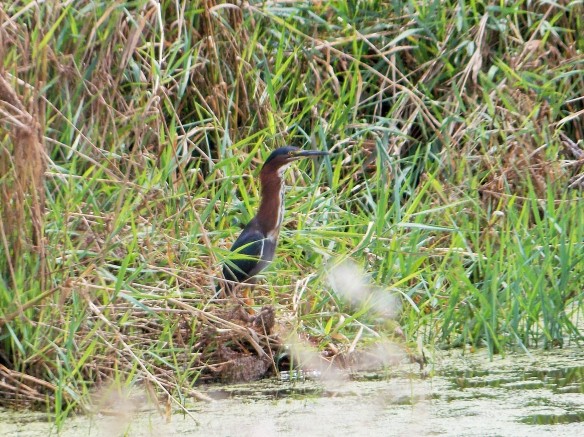 My first good sign was a rather cooperative Green Heron.

The mud was pretty calm because it was the heat of the day, but the very first bird I saw was #114 for the motorless list: Semipalmated Plover. As I watched it dodge Killdeer, I realized that I had somehow never seen one in Indiana, so state bird too, embarrassingly enough.

The only other thing of note was this super relaxed Great Egret. At first I thought it might be injured, but after a while it stood up on both legs and flew away with no problem. Does anyone know what it might have been doing? I have never seen one adopt this position before.

After Eagle Marsh, I decided to bike again today despite the heat to try and mop up another bird that has been evading me on the motorless list: Pileated Woodpecker. I headed to Fox Island with this bird in mind. 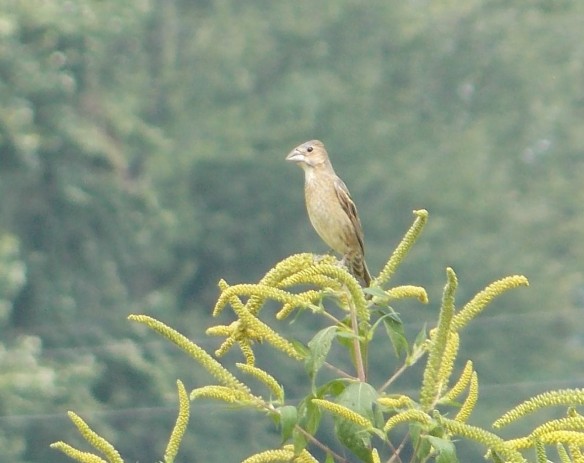 My route took me past the quarry where Blue Grosbeak has become my nemesis over the last two years, but today I decided to stop and look around for one. I found two birds rather easily. Nemesis slayed! Even though this juvenile bird is in some boring plumage, check out the size of that bill. You can’t be disappointed with that. Lifer, and motorless #115. Further down the road closer to Fox Island I encountered two more, including a blue adult male that I couldn’t get a picture of but bringing my total to four individuals, which was pretty exciting.

Inside of the park, I was riding high from BLGR and totally pumped to see my woodpecker (which is the same one that deviled me during my Taken For Granted Challenge with The Laurence last year). As I was riding around, my eyes caught a largish bird that at first I mistook for a Gray Catbird.

Nope, Yellow-Billed Cuckoo! Lifer #2 for the day (actually within half an hour) and motorless #116. I was thrilled to see this bird, because my only other experience with one has been as a carcass on the sidewalk by my office.

On the ride out, I did finally manage Pileated Woodpecker flying over the road in the same place where I saw two of the grosbeaks. My list is now at 117, and getting two unexpected lifers made today one of the best outings I have had in a while. I was happy enough to be singing a little bit in my head on the way home, and appropriately enough, my favorite Scottish pop group has some songs that are totally appropriate for these birds.

Two years ago when Walter was born, Jaime and I felt morally obligated to sit around and look at him for 21.5 hours a day (with the other 2.5 being reserved for sleep, of course). Alice was born on August 2nd, and with other stuff to worry about, we are kind of laughing about how much we stressed over this whole having kids thing. In fact, I have been birding (and lepping) with regular frequency lately. I am of course aided by synchronized napping from the kids and the fact that I took a bunch of time off work. But my prediction of not being able to continue birding very much has been mostly wrong. 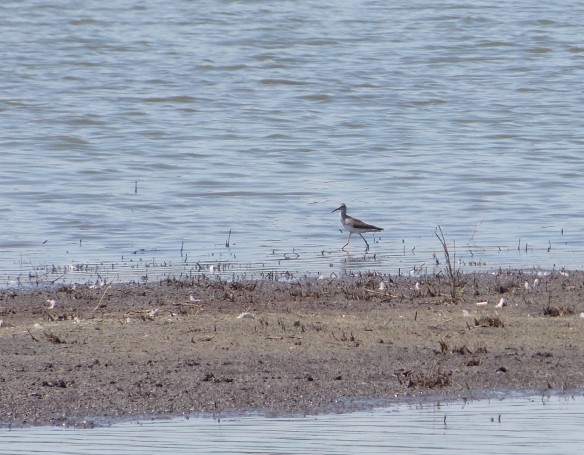 I biked to Eagle Marsh today with the primary objective of getting some badly needed shorebirds on my motorless list. With receding waters and mild weather I was rewarded greatly. This Lesser Yellowlegs was only the first new bird of the day.

Well hello there, small flock of Ring-Billed Gulls. Why are some of you smaller with a rusty wash on your skinny necks? And what’s the deal with those funky bills? Oh, it’s because you are actually American Avocets? That’s cool. State bird! I only lifered AMAV earlier this year during my trip to Lake Erie, and I did not expect to find them in Fort Wayne, let alone motorless. I won’t pretend that I didn’t know these birds were here and set out with them in mind, but prior to seeing the report the previous evening, I was still intending to go to Eagle Marsh for some shorebirding, so I like to think I would have found them on my own anyway. Even still, these will compete fiercely with Black-Bellied Whistling Duck for Best Bird of the Year. They are an unquestionably solid bird anywhere in Indiana, especially away from the big ticket hot spots in the southern part of the state or on Lake Michigan.

The good shorebirds kept coming, with some shockingly un-skittish Least Sandpipers that gave me great looks and somehow were also new county birds for me. The decurved bills are pronounced on these birds, which is a field mark I don’t think gets mentioned enough.

Also joining the shorebird party was this juvenile Spotted Sandpiper. In all, I left the day with four new birds for the list, putting me at 113 for the year without motor. But I saw more cool stuff recently, too.

I have been kind of obsessed with butterflies lately. Since I started photographing them earlier this summer I have learned a ton. And am getting better able to ID them, like knowing that the supposed Pipevine Swallowtail I talked about in the last post is actually a black morph of the Eastern Tiger Swallowtail, whose normal colors were represented by this stunning female that visited my yard a few days ago. 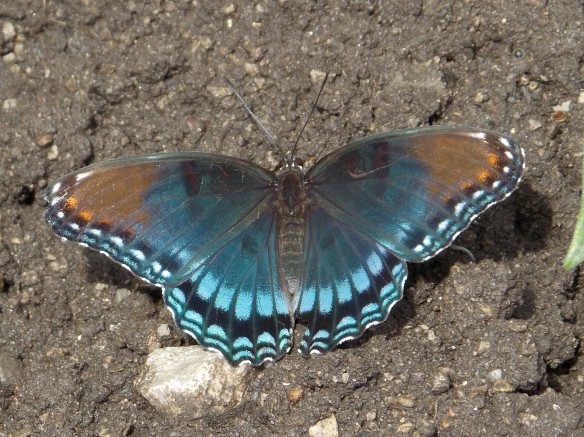 I went to Foster Park for two consecutive days just to look for butterflies, and I began to revisit species I have previously seen. But I spent more time trying to get photos that do them justice. Here is a Red-Spotted Purple, the species that got me hooked.

I just posted a Monarch recently, but unlike before this photo isn’t blurry.

I am only just now starting to learn about Skippers, which I understand to be like the butterfly version of Empidonax flycatchers only way, way worse.

If I ever have a successful career making hip-hop music, my stage name will be Hackberry Emperor.

This is a Summer Azure, aka Tiny, Tiny Coked-Up Spazmotron. Good lord was this thing hard to photograph. 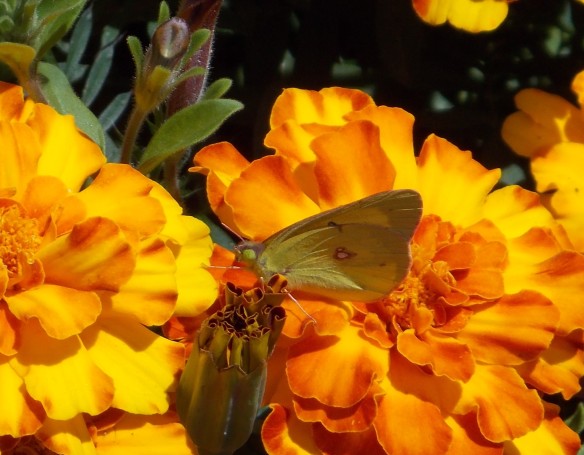 Again with the tricky IDs… I am confident this is a Clouded Sulphur, despite their many dopplegangers. 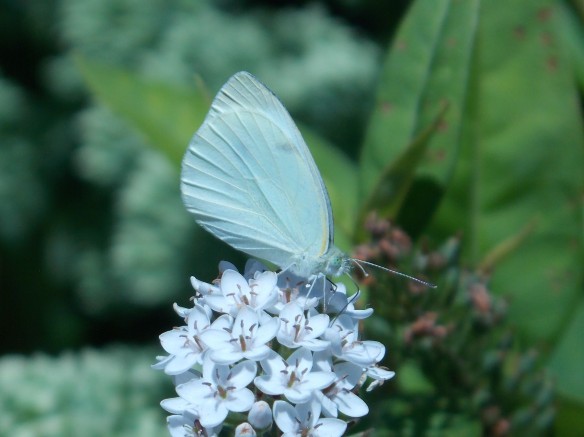 From what I understand, Cabbage Whites are the House Sparrows of the butterfly world.

Here is another Skipper, this one Tawny-Edged and photographed with my phone. 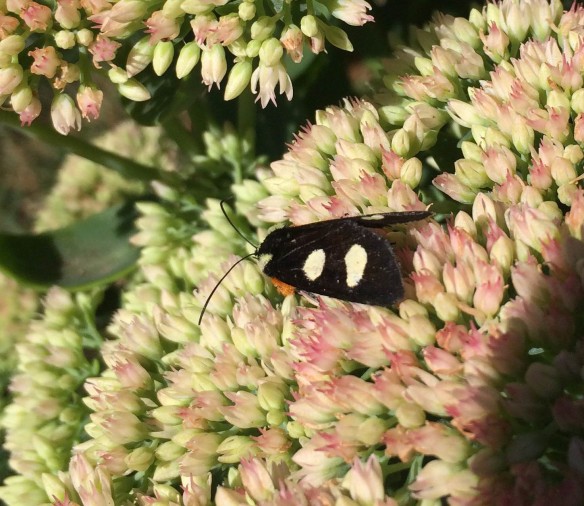 Sharing the same flower was an Eight-Spotted Forester (only three spots pictured), which I guess is actually a moth. There are a lot of moths. I am not sure I want to go down that rabbit hole yet.