Six months, huh? Okay, here are some things I have done since July.

In August we took a family hike at the Hathaway Preserve in Wabash County. The primary feature here is the creek cutting through the bedrock, offering impressive scenery and topography uncommon for northeastern Indiana. We caught a lot of frogs, discovered many crayfish, and got away from town for a while. Not particularly birdy, but if you are in the area it’s worth a stop just for the contrast to the surrounding cornfields.

The yard list is now up to 90 species (and I get a cake at 100)! Several new birds showed up one day in September when a big mixed flock flew through the yard. A highlight was this female Black-throated Blue Warbler!

A Blue-headed Vireo was also a pretty great surprise, although this was the only photo I could manage.

A very late House Wren was also part of the party.

One day in October, a House Sparrow with a bizarrely over-long bill showed up at the feeder.

It only stayed for a few minutes and did not seem to have any trouble eating. I haven’t seen it again. Avian Keratin Disorder?

Like in much of the rest of the continent, Pine Siskins descended upon our yard in a big way. Beginning in late October (and continuing as of today), we have had a persistent flock of these ravenous granivores. My high count was 15 at once. The feeder above was built specifically for this winter’s irruption in my hopes that a bigger finch like an Evening Grosbeak would find the big platform, but these guys are welcome too.

The platform is so accommodating that even birds not typically seen on feeders have given it a try.

Small guys have liked it, too.

Nuthatches in general do weird things.

But not as weird as our small flock of Eastern Bluebirds, which take turns alternately beating each other up over access to the feeder before doing something like the photo above.

Speaking of bluebirds, we saw many at a fall hike at Metea Park.

New Year’s resolutions: bird more, blog more. I’m still doing my green list, but I have found it to be a bit much of a chore to track that alongside a separate 5MR list. I still love birding locally, and most of my green birding happens inside of my 5MR. But in 2021 I am going to assign myself just the one task.

Oof… this blog has gotten away from me. I have had my Facebook account deactivated since March (with one exception, which I will get to at a later date), and that seems to be where I plugged into the birding community the most. I do not miss Facebook at all, but I have noticed less of an emphasis on posting my sightings, photos, etc, which in turn has made me think about this blog less. I have been thinking about creating a Facebook account to only follow bird stuff and nothing else. Good idea? I have seen some things over the last two months, though! Here they are:

After I returned to my office, Jaime kept me entertained with daily updates on our yard bird situation. 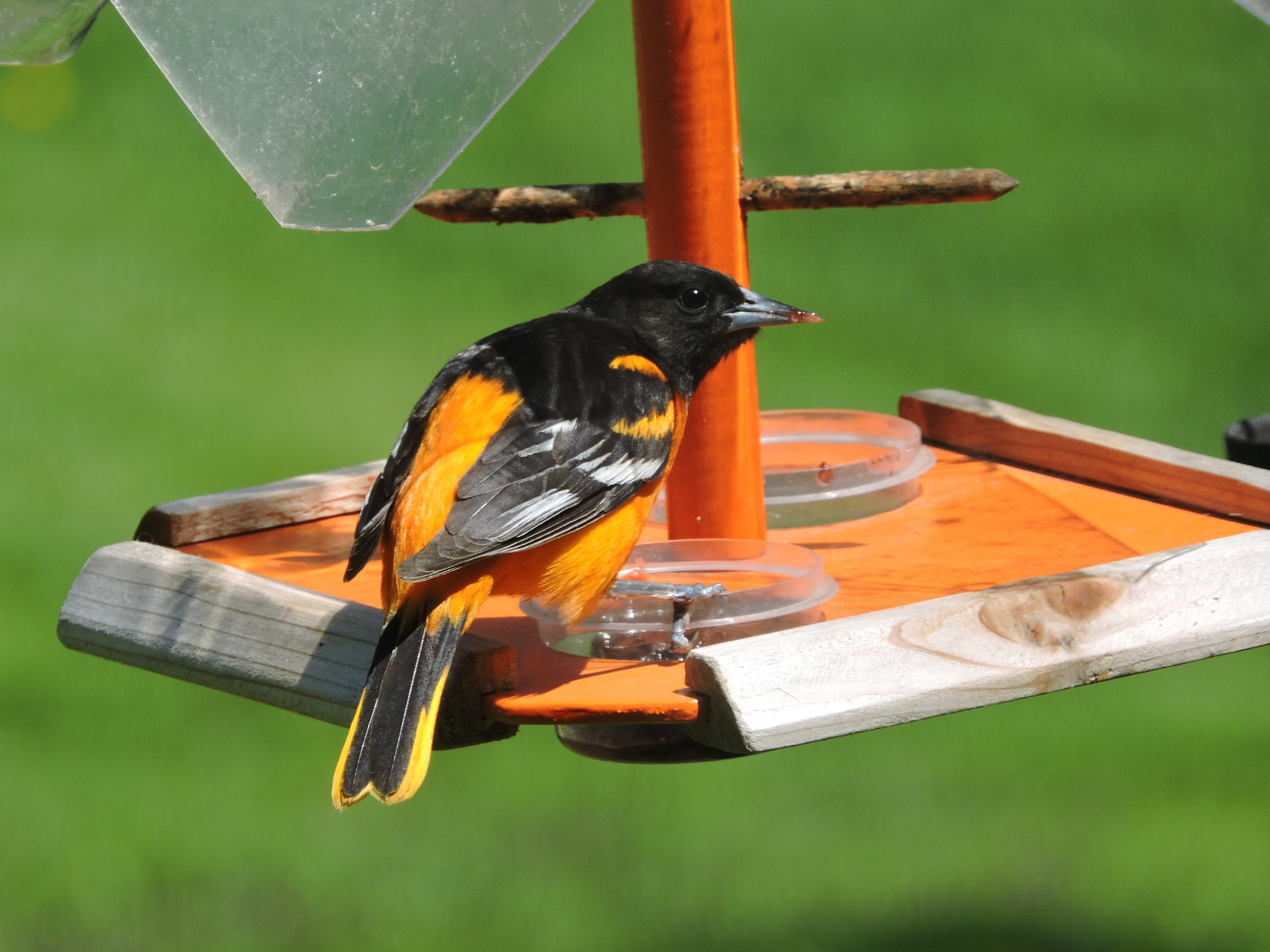 We had a small flock of Baltimore Orioles that were regulars at our jelly feeder. The most I ever saw at one time were three adult males. 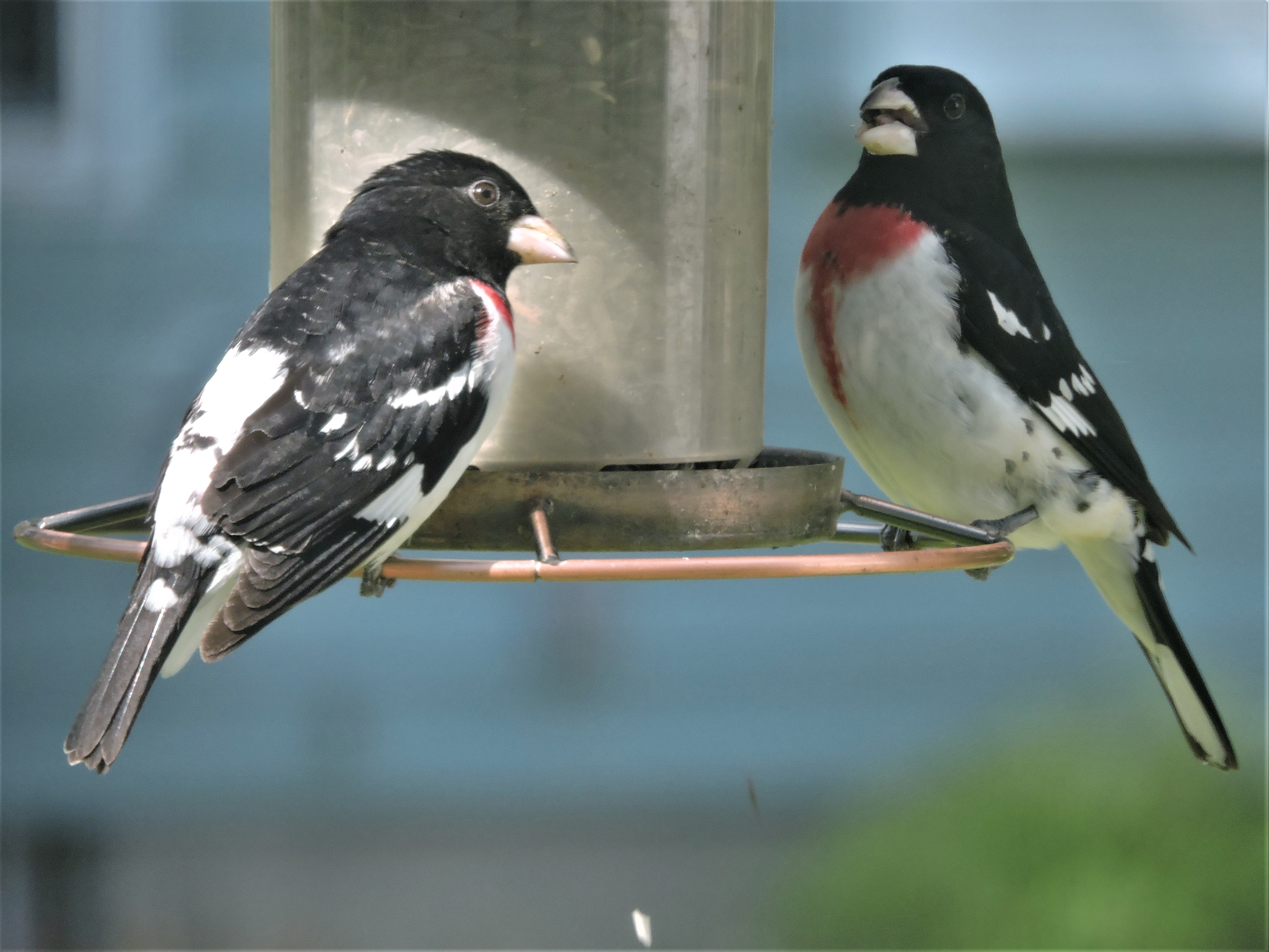 Rose-breasted Grosbeaks showed up in similar numbers but did not stick around as long. All of these photos are Jaime’s, by the way!

I birded a few times locally this spring. The magic scrap of wetland at Franke Park turned up a couple of Prothonotary Warblers one morning. They were a new bird for that park for me and new for my 5MR, which was exciting stuff. 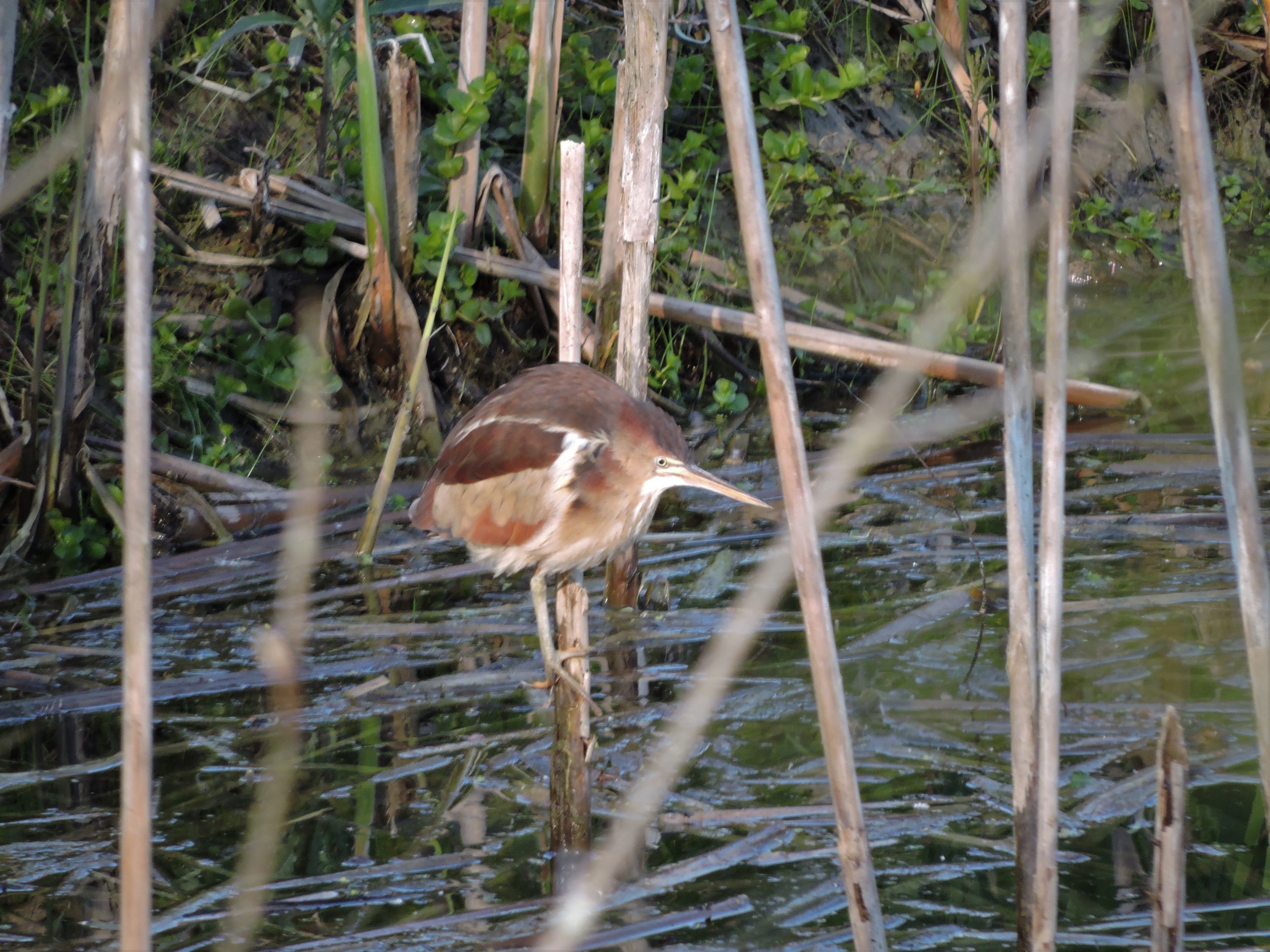 The excitement lasted until my friend said, “Is that a Least Bittern?” Then the warblers were quickly old news. This bird was chilling out in the open not more than 30 feet from us, letting me get a photo of it unaided with my cell phone (this is not that photo). For perspective, this “wetland” is a scrap of cattails about 30 feet by 20 feet that is directly behind a BMX track and totally surrounded by mowed grass on all other sides. I have no idea why a Least Bittern chose this spot, but it was a visual lifer for me (I had only ever heard them previously) and the bird of the year to that date.

Here is a close-up of a Black-throated Green Warbler that we saw that same day. It preened in a bush, not moving for several minutes. The most unwarblerlike warbler I have ever encountered.

To round out the photos, here is a Blue-headed Vireo, a bird I don’t see very often, but which appeared immediately after one of us said something along the lines of “I can’t believe we haven’t had a vireo yet.” Funny how that almost always works. I ought to try it more often.

The rest of my good spring sightings have occurred incidentally, including a Yellow-billed Cuckoo at my inlaws’ house and Common Nighthawks over my backyard while mowing the grass. Even if there’s been a lack of posting and a lack of photos, it was a good spring! More to come soon. And maybe I’ll even update my Green and 5MR list pages.

It has been a while since I’ve last blogged, but to make it up to you I hope that this next series of posts will be more interesting than the standard fare here. I just got back from a week-long trip to Raleigh, North Carolina for family, multiple birthday cakes, and of course birds.

I have always brought along my camera when visiting the parents, because North Carolina offers better diversity and a few different species than what I am used to in the Midwest. But during the week we were there, my down time was filled with exploring the biodiversity around their new home on the northwest side of the city. 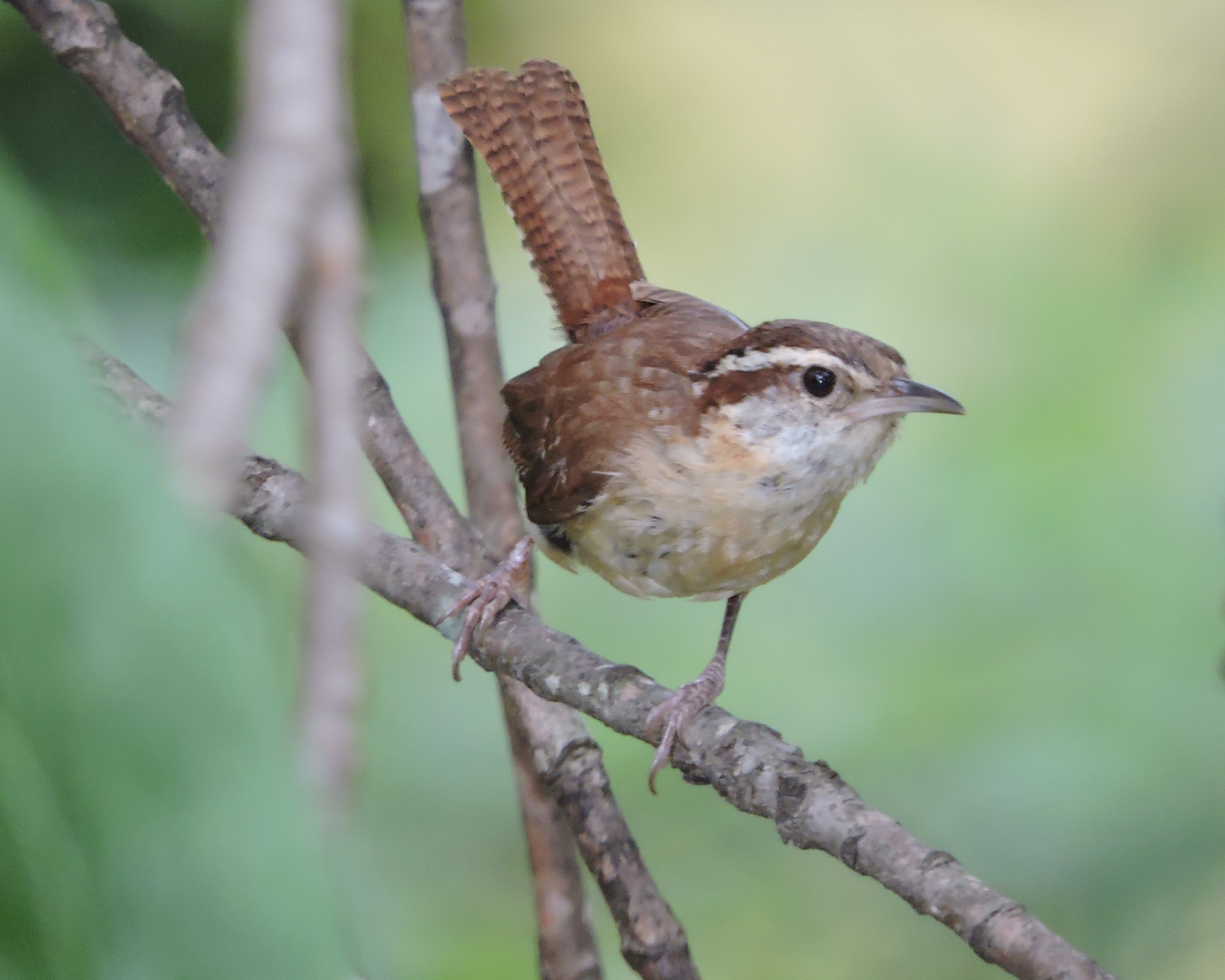 The yard birds were superb, helped greatly by proximity to a lake and the William B. Umstead State Park. Though abundant and also easily found in the north, Carolina Wrens evoked a feeling of being in the south that few other birds can match.

Okay, so Brown-headed Nuthatches can match and surpass that feeling. The only thing that could make this photo of a BHNU perched on a pine cone more southern is if it were sticking its bill into a vat of pork barbecue.

The butterfly game was also strong in the yard. Every morning a pleasant cloud of Zabulon Skippers would be nectaring in the flowers by the front porch. Life lep! 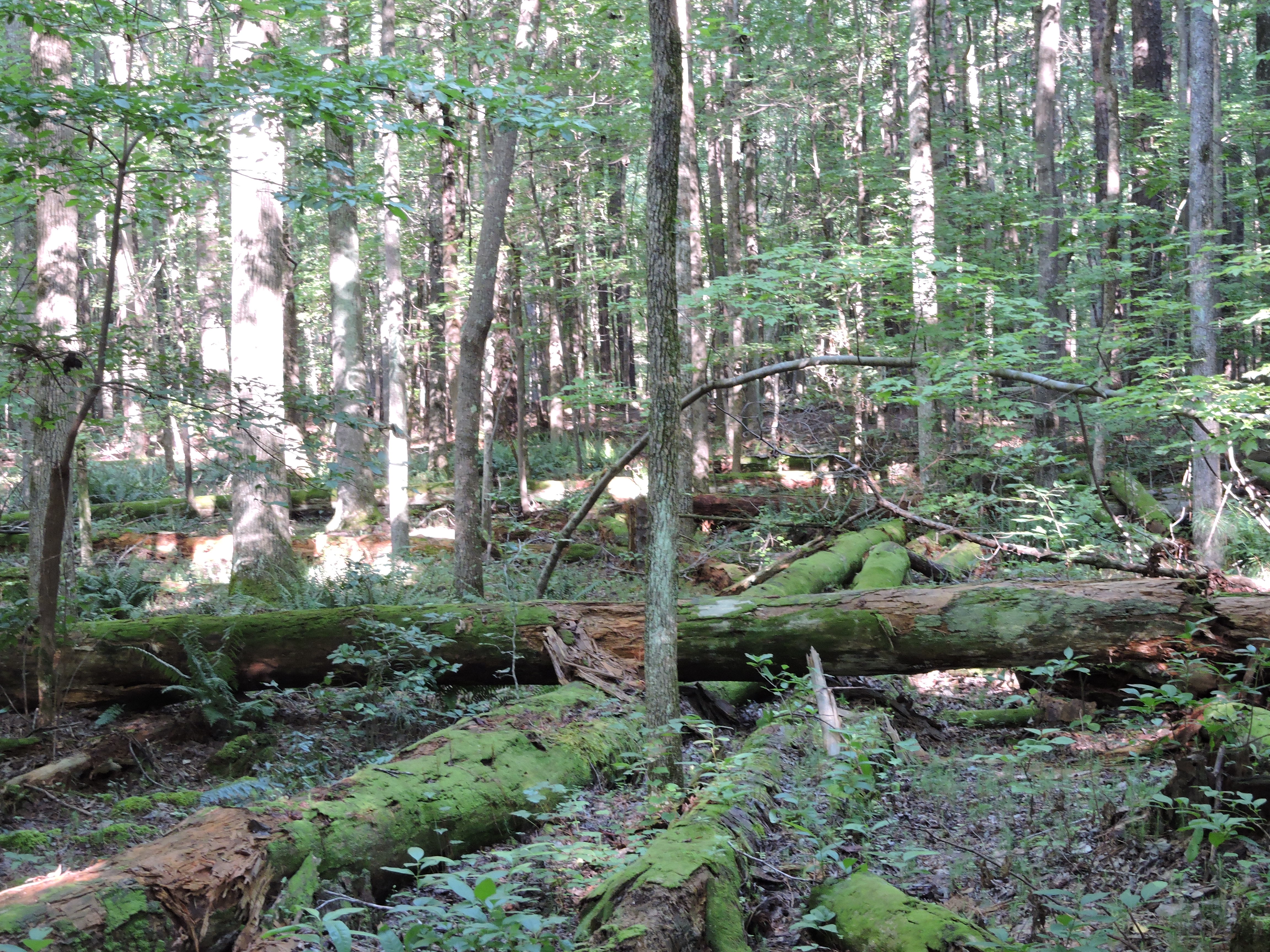 Birding in the neighborhood wasn’t complete without a visit to the Umstead State Forest next door, close enough to walk to.

The park did not offer any new birds, but the number of species that I have only seen once or twice in the Hoosier state were impressively represented. Summer Tanagers were clucking everywhere, which was exciting to see because I live on the very northern fringe of their range and only rarely see them.

Blue Grosbeaks were also exceedingly common in a power line cut going through the middle of the park. Again, found in Indiana, but not very often.

The trail eventually opened up on a big lake fittingly named Big Lake. 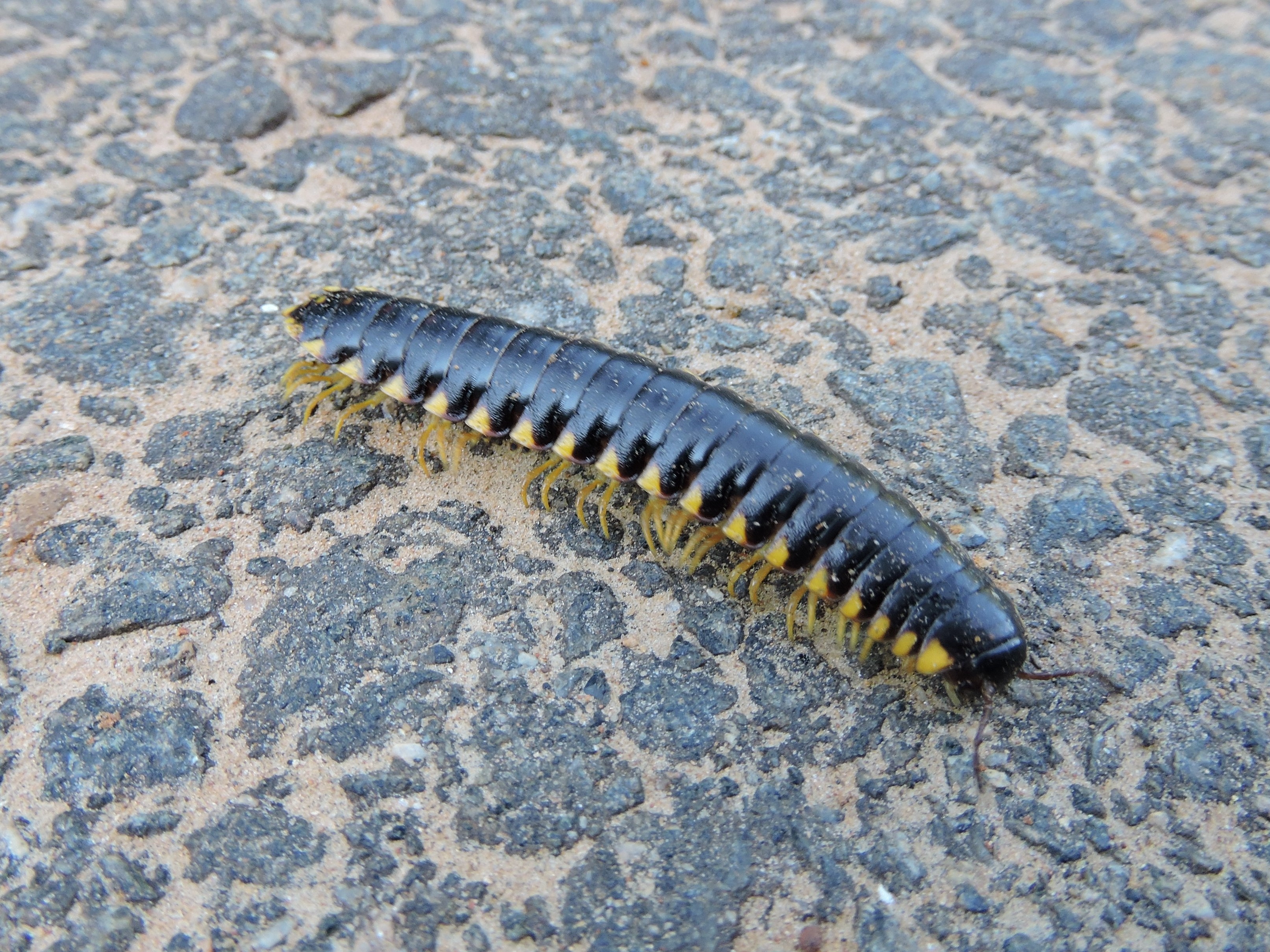 The lake allowed all kinds of bugs to flourish, including some pretty crazy things like this weiner dog-sized ‘pede.

Again with the skippers, and another lifer in that regard. This Southern Cloudywing was the only one I saw on my hike.

While I will never get used to the feeling of walking through a spiderweb while focusing on a distant bird, at least they can be pretty scenic.

The vireos really seemed to like the arthropod buffet. And again, this is a species that I have only seen  few times previously.

With the good birds (and other things) coming at such a rapid clip, I was in the mood to get out of the house and out of town for an extended morning to go hunt much more rare creatures. That summary will be coming up next.

A new event hosted by Fort Wayne Trails is the Early Bird Nature Walk and Bike Ride. It is geared toward amateurs of both birding and biking, and I participated in the second event yesterday. Despite the damp and cool conditions, about ten hardy souls met at the Wells Street bridge to use the city’s trail system in pursuit of birds.

The beginning part of the event was an urban hike along the St. Mary’s River downtown, which turned up many good birds including several first-of-the-years. The second part was a bike ride that traversed much better habitat and produced some pretty great results.

The route took us about four miles downriver to Foster Park, where we were treated to some incredible looks by a radioactive male Scarlet Tanager, which is probably one of the best birds possible to get first-timers interested. In a small mixed flock including said tanager, I also managed to pull out my lifer Blue-headed Vireo. This is the first motorless lifer I have had this year, and I am pretty sure it’s my first lifer at Foster Park as well. It is also Indiana bird 199. 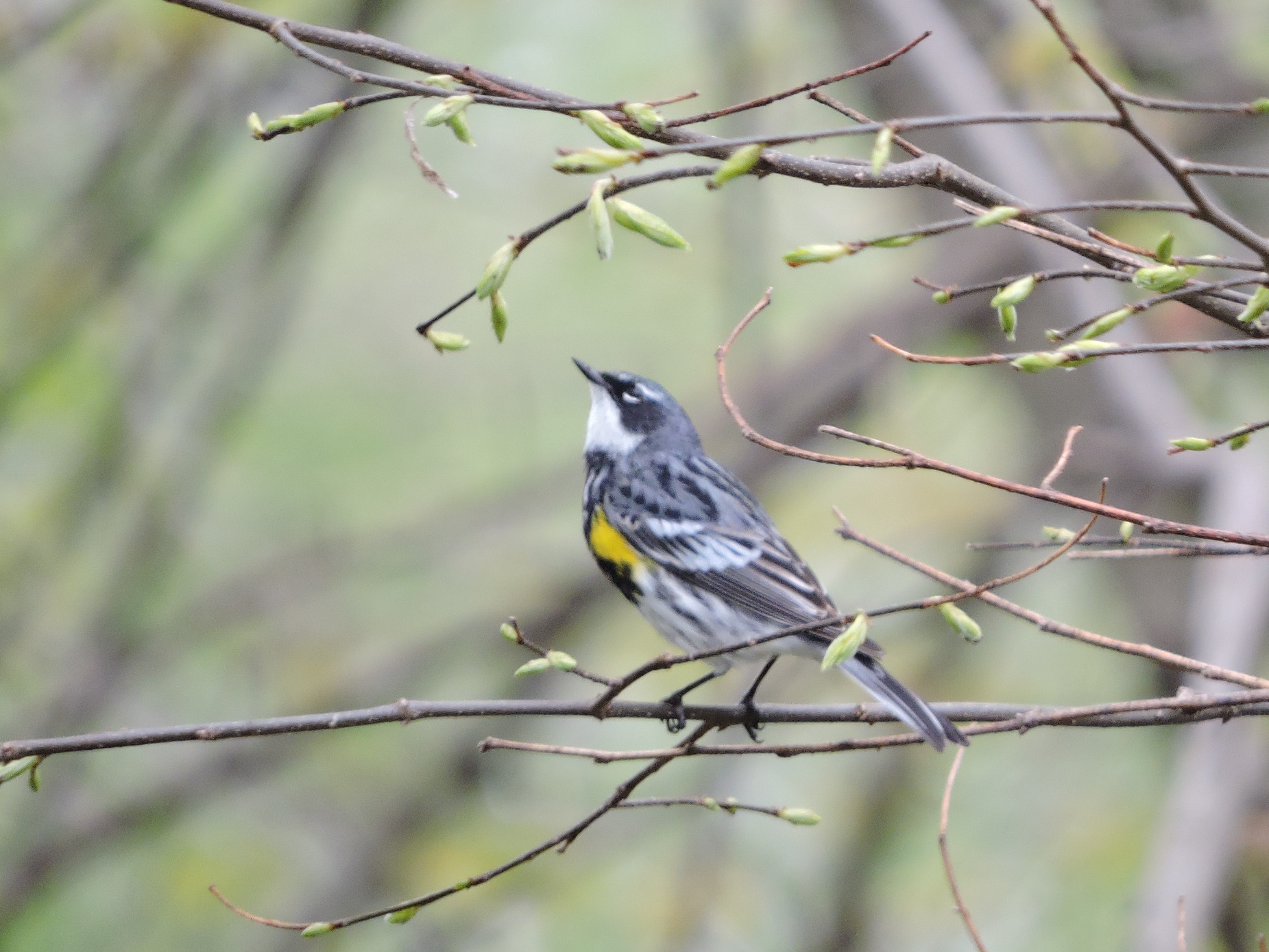 Much of the group also had their first warbler experience. Specifically, they learned how difficult they can be to actually see and identify. Fortunately we were treated to point-blank looks at a few Yellow-rumps. 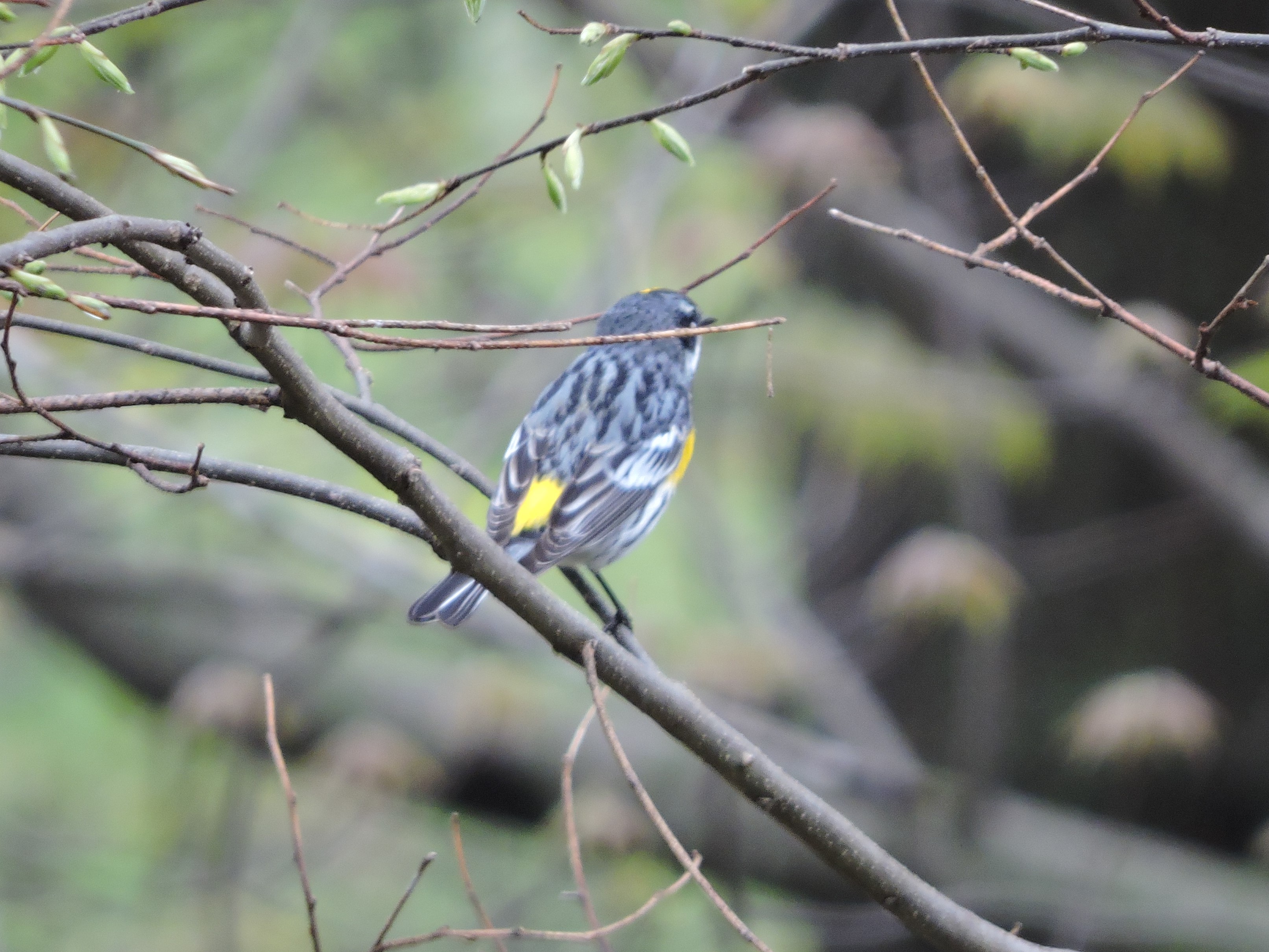 The field mark of this bird was readily evident.

We only get one flavor of goldfinch in the Midwest, but the group was very appreciative of a bird I often overlook.

After the ride had ended and a friend and I had some requisite Pint and Slice for lunch, I rode back through Foster on my way home. I picked up a few more annuals that the group had missed, including this Swainson’s Thrush and a stunning singing male Blackburnian Warbler, which was a county bird for me.

I ended my afternoon with 43 species, with 13 new green year birds including one lifer which brings my list to 94. Most of these were seen in a disused corner of the park that includes a rotting picnic pavilion. Apparently the trails through Foster used to be paved roads that attracted cruisers and teenagers. Luckily for me and the birds, it is foot traffic only now and quiet enough that we stumbled upon two Cooper’s Hawks actively tending a nest close by.

Not bird related but still worth mentioning is the raccoon that was raiding our feeder before I left for the ride. I didn’t mind too much because he was finishing off some old stale seed.

He employed a friend to make sure the coast was clear. Teamwork, because there is no ‘I’ in ‘raccoon’ or ‘bunny.’

To bring things back around to birds, and because I have nowhere else to put it, I will end with this Wild Turkey. I encountered this fellow at work last week and had to decelerate more rapidly than I would have liked to avoid hitting him. I usually only see turkeys from the interstate where stopping is more frowned upon, so this time I seized the opportunity to fire off a couple shots while he crossed the road in front of me. He was also only about 200 yards from the county line, so this was another county bird this week, although I wish I could add it to my green list.